31 May There’s a Reason Wine Exists, #projectdownunder and Pillows

Posted at 08:54h in Life by Christine Dovey 13 Comments
Share
Let’s start with the positive side of things…my min-dude slept from 8:30-5:30 last night…yes it was in the swing but holy dinah…my other kids didn’t give me a solid stretch like that until they were like 3.
Unfortunately, the reason Jasper slept like such as angel was not so positive….quite the opposite- sort of mommy scaring actually.
Let me explain.
As I mentioned in yesterday’s post, Scarlett had a few auditions downtown…turns out she got called in for a third at the last minute…I had to pull the two older kidlets out of school, get ready, pack everything, print a resume, find pay slips and comp photos, feed the baby etc. etc. and be at the location in like an hour from finding out- not fun.
Anyhoo…we made it there just in time to for Scarlett to decide it was a good day to be all about the sass…the fun started when she met the other girl she was shooting with and discovered that said girl was getting fit with a princess shirt, while she was being given the My Little Pony alternative…things went downhill from there since my kid has a hard time getting out of her own headspace now and then…the director had to eventually call me in to the room to get her to focus…and PS, just as a reminder, I had two other kids in tow…oh and to add insult to injury, middle kid hadn’t finished his lunch and was basically operating on an empty stomach…and I forgot the ipad…and I stupidly gave him a giant sucker I found in my bag to keep him happy…see where I’m going here…BOUNCING OFF THE WALLS BULLSHIT.
Thankfully, baby took pity on me and was a gem through it all.
So…we left location #1 and I spent the entire ride to #2 location lecturing the kids on their behaviour and my expectiations and yadda yadda…over it.
Audition #2 was quick and easy…things were looking up….or so I thought.
Location #3 was a small bedroom sized room with about 100 kids and their parents stuffed inside…and it was 400 degrees.
Husband met me at this one since it was early evening and sat in the car with the boys and I went in with Scarlett…I thanked the gods on this one because baby would have literally melted inside this place….but…Sass girl dedided to coem out and play again…the kids auditioning were all put in groups of 3 and were told to run around in a circle…then, one kid had to fall down and the other two had to pretend to laugh at him/her…problem #1…Scarlett wanted to be the kid who fell down and went into a 5 minute negotiation with the director about why she couldn’t and when she potentially could…then, she objected to the laughing because and I quote “don’t you know that laughing at someone is called bullying and that’s not nice” – so…again, probably not going to get a call back on that one.
I was very relieved when the audition fun was over, to say the least…but….
un-benounced to me, the real fun hadn’t even started yet.
My oldest daughter was due to arrive home from her big European gallivant trip at 6pm (it was 5 at this point) so I suggested that my husband take the Scalrett and Malcolm with him and I’d drive home with the baby….smart I thought…I was wrong.
After literally being on the highway for less than 30 seconds, we hit the traffic jam to end all mother fucking traffic jams…3 separate accidents meant that the road was literally completely stopped.
I’m sorry for that big sweer but my god, it was the worst 4 hours of my life.  About 10 minutes into it, babes woke up and started screaming…after about 20 minutes of trying to put soothers in his mouth/shake the carseat/plead/shussh/cry  myself, while driving a car, I absolutely couldn’t take it anymore and veered off the highway and parked along the side of the road, just so I could rescue Jasper from the car seat and give him some boob to pacify…we sat there for an hour at which point I decided to have a go at getting home again…we took city streets to get back on the highway, but because everything was was so backed up, the city streets were too- took more than an hour to drive 5km.
Long story only slightly short, it took me and sweet baby 3.5 hours to get home…and PS, it’s a 20 minute drive normally.
Listening to my baby cry for me in the backseat of the car I’m driving, and being able to do pretty much nothing about  it = MY IDEA OF ETERNAL DAMNATION.
Seriously…the worst.
So, that’s why the baby slept…he was forced to stay awake like the entire afternoon, after being carted around from place to place in his wretched car seat and then got stuck in it for more than 3 hours alone in the backseat of car…the poor kid.
Needless to say that when he was finally home and hopefully dreaming of anything but the day he had, I guzzled one laaaaaaaarge glass of wine…it was that or jumping out the window so I thought it a good choice.
Thankfully we’ve got absolutely nothing on the books today so I plan on letting us both do nothing- the other two both have school today so baby and I are very much looking forward to some quite boredom.
And now that I’ve finished that rather large diatribe, let’s talk about something better…design pretty.
Before yesterday’s fun day started, I did enjoy some blog reading…it’s been way too long since the last time I really got around to visit everyone so it was nice.
A post by Natalie Merrillyn was particularly eye catching…she featured a Sydney home that was patially wallpapered in
Maritinque’s Beverly Hills wallpaper… 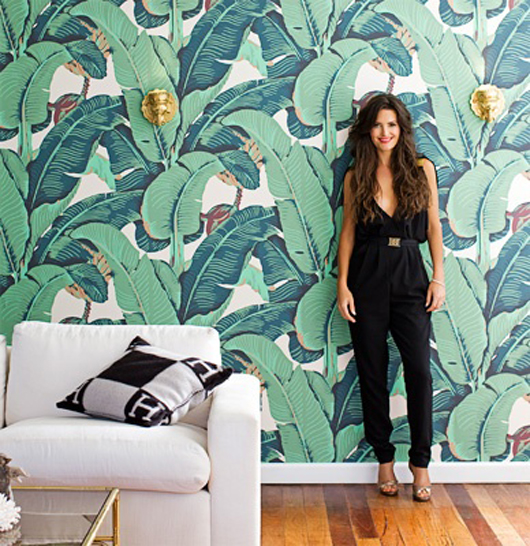 Something about it made me want it hard for my #projectdownunder client…maybe because the inspiration home is in Australia? Who know…anyhoo…I emailed my client asking if she’d consider and because it’s a crazy small world, it turns out she actually knows that girl in the cute jumpsuit…seriously…what are the chances?
We’re considering putting the paper up in her entrance hallway and though I’m not officially working on this space, I couldn’t help but throw a quick board together to show her how adding this bold green pattern could work amazingly well with our pale blue, black, neutral scheme… 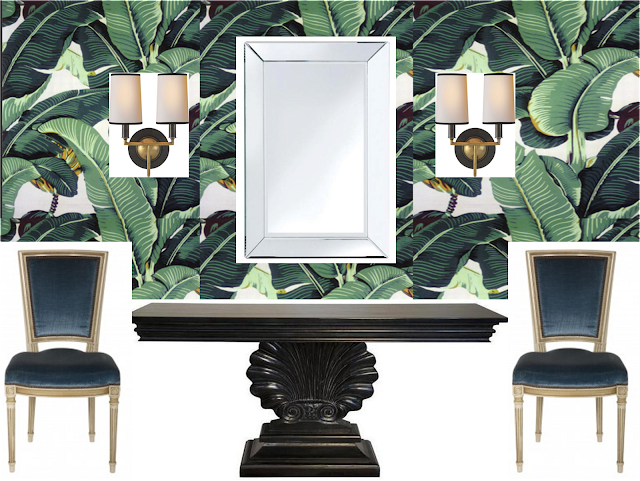 The  mirror is already owned by my client and I’m obsessed with that
Black Rooster console table…the vintage velvet numbers are Jayson Home and Garden and the sconces are from Circa Lighting.
I’m very much hoping this happens.
In addition to this little addition, I also spent some time last night switching a few things up- we’ve decided to leave the existing chandelier over the dining room table but are going to take the Trillion flushmount and put it in the lounge.
Also, after starting some more at my client’s Pinterest boards, I sort of decided that a pair of hooded chairs a la this Megan Hess illustration… 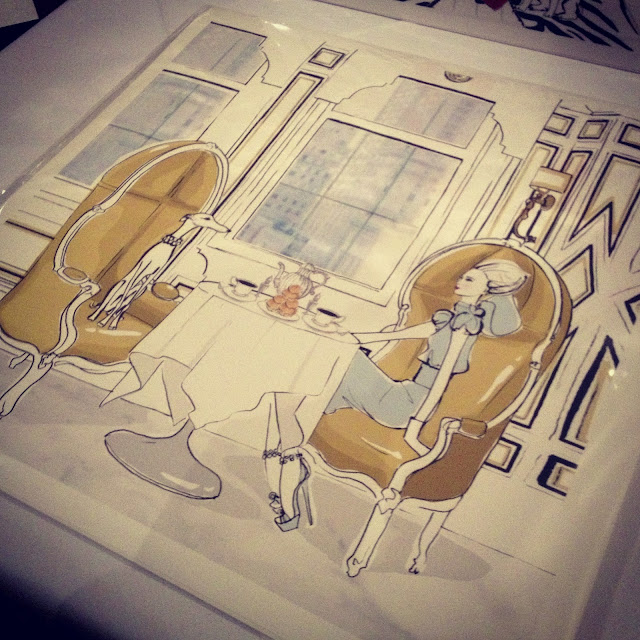 We’re thinking of doing them in a pale blue velvet and sticking them in the lounge,  in place of the settee…we’re also going to move the console that I sourced for the dining room into this room.
This sort of thing is what I’m thinking… 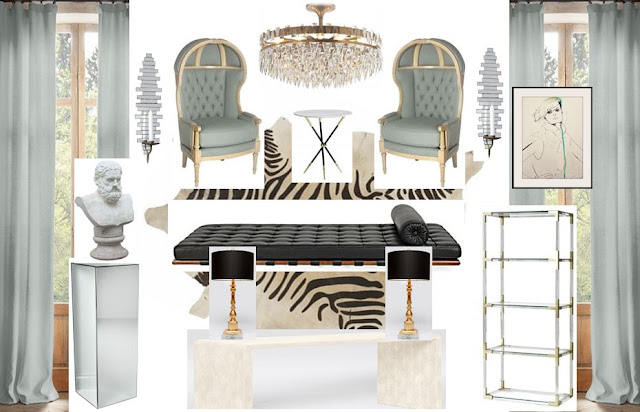 Luxalicious.
Also, since I brought up Megan Hess a second ago/un-related to #projectdownunder except for the fact that they’re also from Australia, I thought I should probably pass on this discovery…along with amazing illustrations, she also does pillows and just look at their girly loveliness… 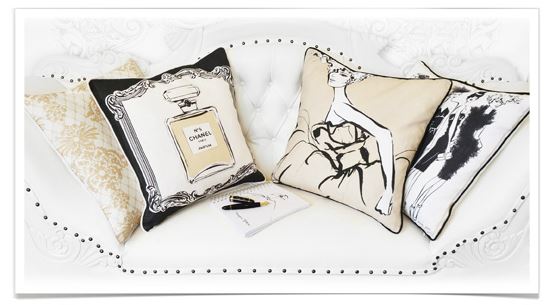 Good, good, good.
And finally, and still on the topic of pillow greatness…my gorgeous sponsor Pillotopia is currently running a…
50% OFF SALE!!!!!!
Hurry up if you want some of this action for half bones… 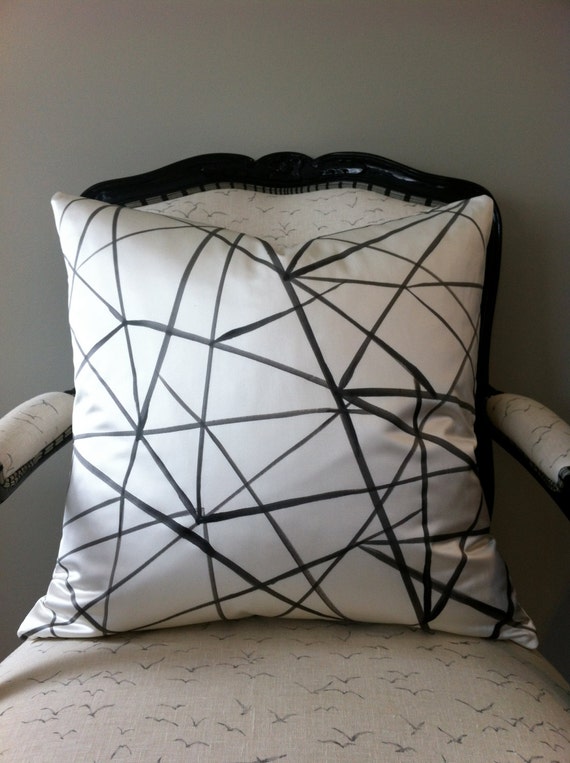 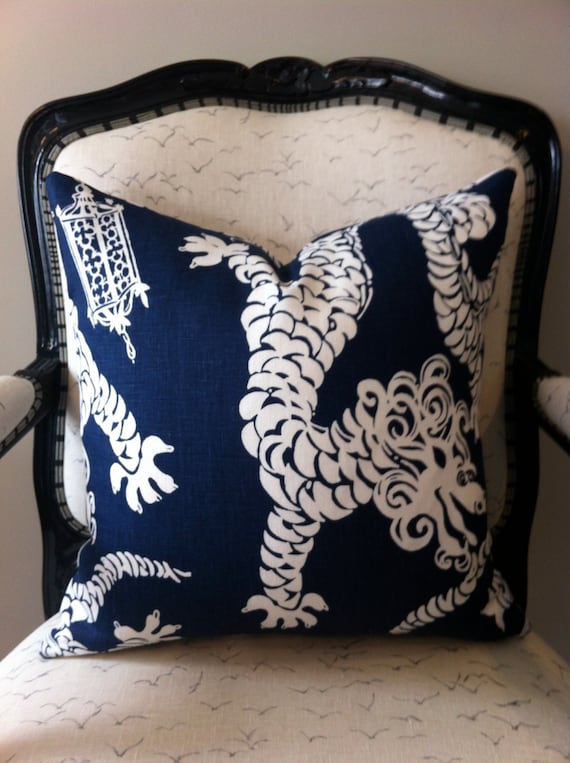 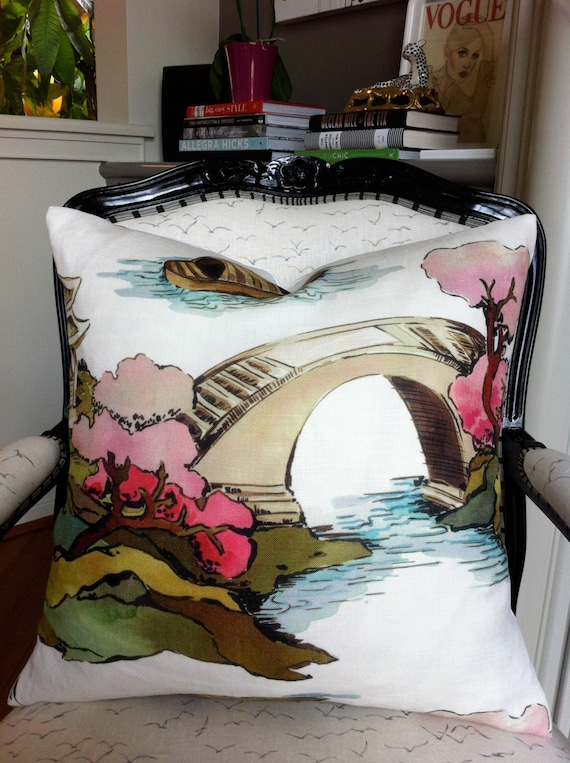 And with that longer than intended post, I’ll shut ‘er down for now with some big smooches…happy almost weekend.
xo