Posted at 06:21h in Life by Christine Dovey 0 Comments
Share
I DIY’d and since it’s not something I do often, I had to share.
I mentioned a few weeks ago that I had been asked to take part in this Fall Home Show…

The instructions were to find something at a local Habitat for Humanity ReStore location and than upcycle/transform it into a piece that was a little more lustworthy.
We were given a $100 store credit to make our purchases.
After visiting literally every ReStore location in the city, I found this number… 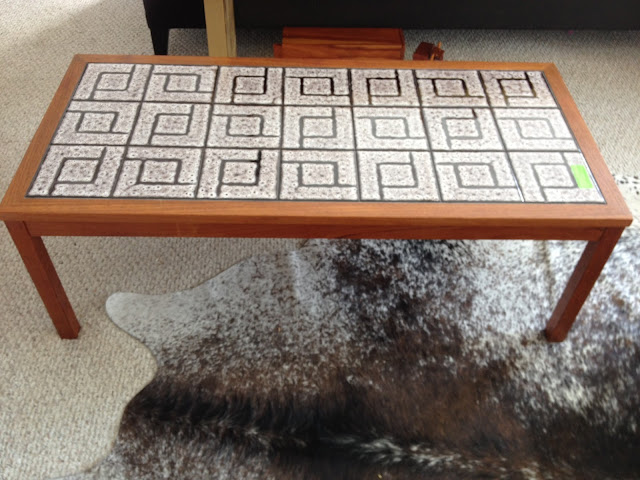 I had already been dreaming of making an upholstered bench out of a coffee table and well, this lady was PERF.
So, I set to making my plan morph into reality.
Once home, the first step was to chip out the tiles…hubster helped with this part…me not so great with breaking things when I’m trying to not really break them;)
After the tiles were out, I sanded the base and then began with step two…gold leafing y’all… 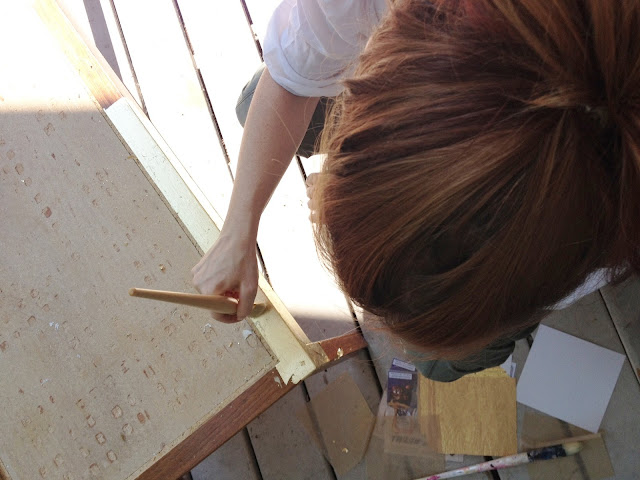 I was surprised at how relatively painless this step was…the great thing about leafing is that even if the sheets go on all wonka doodly like, you just brush afterwards and they magically smooth out.
The leafing took a good two days to finish…after one entire coat was done, I had to go back and re-apply some new sizing glue on the spots that were left bare ont he first pass…I think we used 7 packs of gold leaf all tolled. 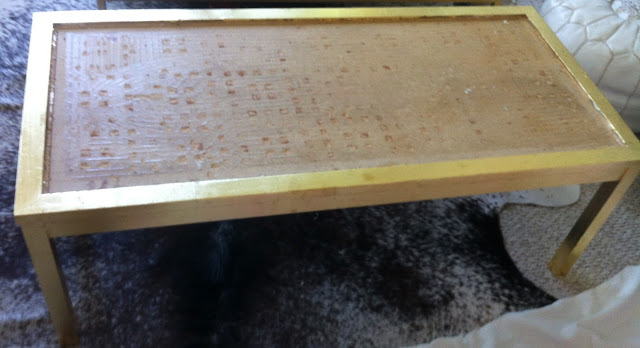 After the base was done, I set my sights on the top and sent hubster out to buy some foam…unfortunately, he spent 50 bones on a 4″ think piece that made the whole thing look sort of bizarre.
So…I returned to the store and picked up a 1″ version, which I cut to size… 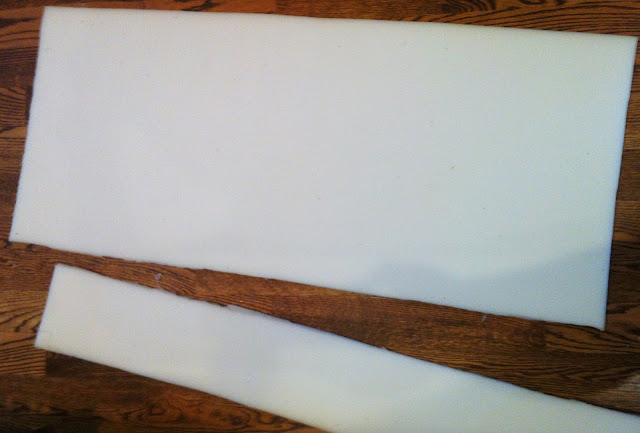 …and some batting…I also had a piece of MDF cut  so that is was just slightly smaller than the opening.
Next, I picked up a yard of upholstery satin (along with a few back-up fabrics just in case…if you’re in the market for some great black suiting fabric, I’m your girl) and some pink fabric paint and got to work creating my own fabric… 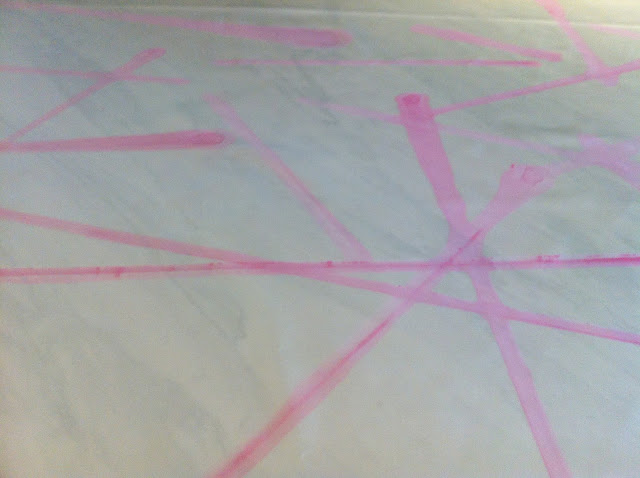 I watered down the paint and used a metre stick to make nice straightish sort of lines. 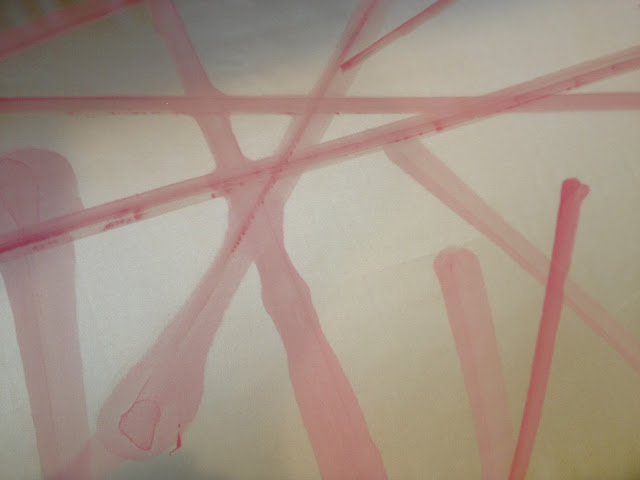 After the paint was dry, the upholstery part started.
Basically, I just lied the MDF on the island with the foam on top and then stretched batting over the two, securing it underneath with staples.
And finally, the fabric piece was added and stapled.
The very last step was to line the hole left by the tiles with some left-over satin so that none of the raw table edges would show once the cushion was glued in.
After all was said and done, this happened… 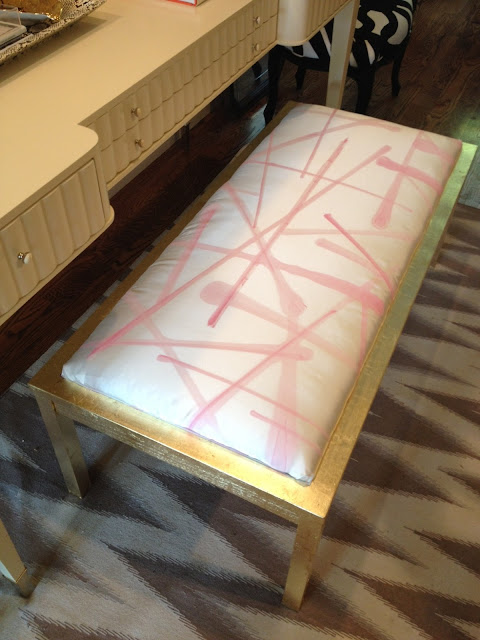 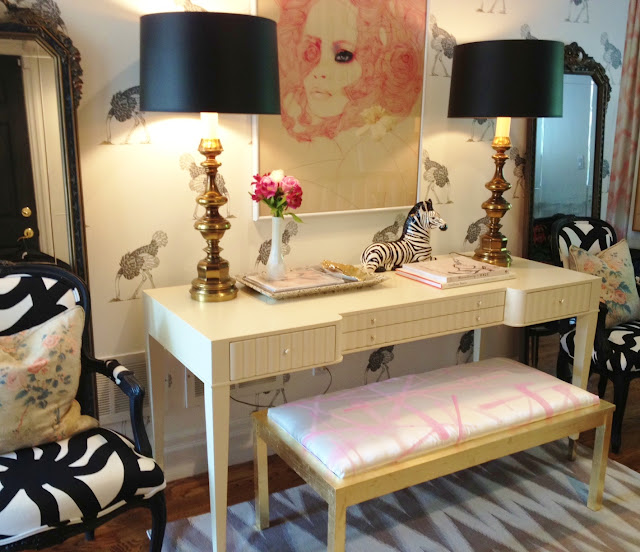 I admittedly, sort of love my bench and am determined to replicate it so that a similar version will live permanently in my foyer.
For now though, this little lady is being auctioned off online to the highest bidder….see HERE for info on that.
Also, a Facbeook contest is being held with all the upcycle entries, as we speak…the top 3 selected will go on in hopes of winning the big prize, which is $500 worth of Visa credit card goodness…lordy knows I’d LOVE to win that so…if would be ever so kind…
…click HERE…
…and vote for your favourite entry…of course I’d love you to the moon and back if you picked my lady killer bench but please do pick the one or three or whatever, that you really in like best;)
Thank you unicorn lovers.
xoxo