Posted at 08:39h in family by Christine Dovey 33 Comments
Share
I thought I’d let you in on a little project I’ve been working on.
My parents have a cottage…in PEI…you already know this because I talk about it all the time…a few years back, they completely renovated the two bedroom log home….which by the way was completely made with tongue and groove joints…no nails…I’m impressed by this…anyhow…they encased the old structure and built around it to make the cottage about twice the size…at the time they did this, there were 0 grandchildren…that was about 6 years ago…now there’s 5 kidlets and two extra grown men- the husbands…so after all of that, my parents want to shoot themselves in the face because again, there’s not enough space.
And PS, mom and pop aren’t the chaos types…they don’t seem to really love hoards of people up in their face and screaming children running underfoot…go figure.
Anyhoo…they looked at options and bought another piece of land across the dirt road and had their former cellar dug out a bit and renovated into a bedroom and bathroom….perfect for a kids dungeon of sorts…and when I say dungeon, I mean a fabulously airy gianormous room that the little ones will adore.
Turns out that the parent units wouldn’t hate it if I helped decorate the space.
High fives…colour me excited.
There’s a hitch though…you can’t get shit in PEI…well I take that back…there are some great little shops and the design scene seems to be picking up but the shopping is limited and it costs like 8000 dollars to have anything shipped there.
So, the plan is to buy the major furniture pieces in PEI and to source everything else here this year and drive it up for next summer.
Now….on to the design.
At first I presented them with this one… 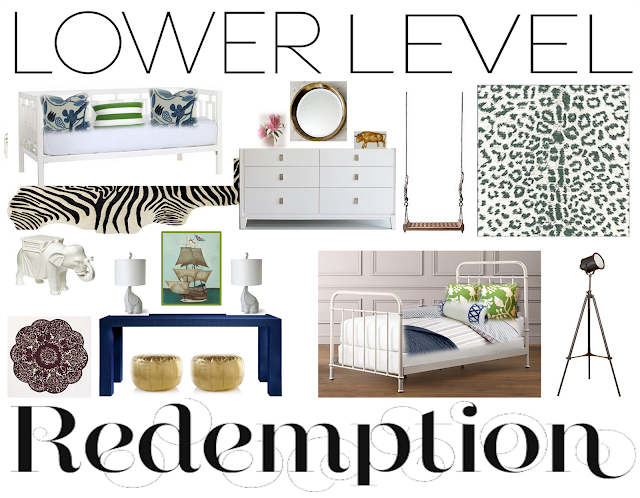 Well truth be told…I actually gave them a design using Scalamandre green zerbas as the wallpaper and they LOVED it but my parents aren’t really the search, source, buy abroad, kind of people so after sleeping on it, my mom insisted on going to look locally and we found/bought that amazeballs leopard print…it’s going in the bathroom.
I also originally sourced out that West Elm daybed and Bungalow 5 grasscloth console but again, the shipping thing was way too aggravating so locally bought furniture is definitely going to be the name of the game…oh and PS, thank you to IKEA and Etsy for allowing me to shop for at least some things online…the rest of you companies suck for not having better shipping policies. And PSS, not being able to shop for pretty thing on my computer blows big farts.
Anyhoo….
The basic tenant of this scheme is royal blue and emerald/kelly green…with little hit of whimsy, since it’s a space meant for kids.
The room will include a dresser (there are no closets,) two twin beds, a console or desk for the TV to go over, end tables and a rug.
Now on to a few other colour ideas…
God knows I love blusy pink with leopard so out popped this board…

I love that Anthro rug for a cottage…especially one in PEI…so apropos…PS, I love saying that word…makes my lips move in fun ways…moving on.
And finally, I remembered a certain bangle (which whispers…mom and dad you can buy me here as payment for my services;) I’ve been eyeing and yellow came flying into the idea onslaught…

So what say you all?
Do you think they chose blue/green, blushy pink or bright yellow?
What would you pick?
I think my mom’s already gone rogue and bought the beds and bathroom mirror…they’ll be home in a few weeks so hopefully I can commence the rest of the shopping then.
Oh and just for a reference point, Ms. Budget/my dad are saying I can spend $5,000.
Let the games commence.
xo