A Project Kitchen Gorgeous Update, a Guest Post and a Chandelier

03 Aug A Project Kitchen Gorgeous Update, a Guest Post and a Chandelier

Posted at 07:16h in Life by Christine Dovey 38 Comments
Share
Taking a few days off means that I’ve missed a few things and have lots to tell you about so forgive me if I pack three posts into one.
First off, a little peek at what’s going on with the kitchen. 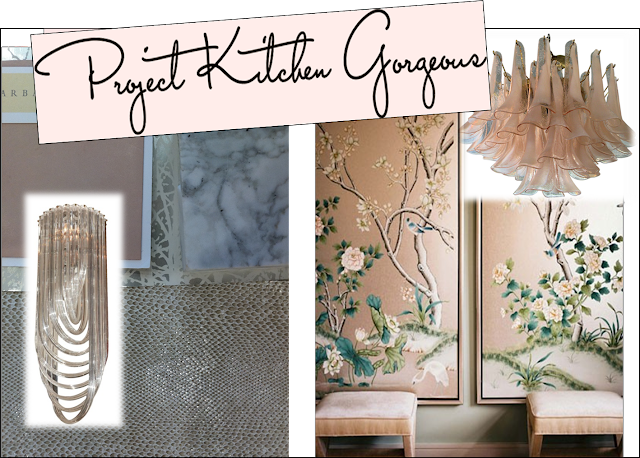 I’ll tell you that most of the big stuff is done…we’re now just waiting for the marble to arrive so that the sink and lighting can be finished.
After that, it’s just a matter of zhushing the place…and PS, I’ll be away for that part- dagger in my heart.
The upside, and it’s a big upswing, is that Meredith will be doing the fancifying…thank you Jesus.
In the meantime, I’ve been starting at some open shelves that are just begging to be adorned…I know they might not end up styled as they are now but I could give a flying frack…PS on that one, as part of my shitastick woe is me week, Meredith tuned me into a new show to watch in one giant mind freeze of computer tv streaming…it’s going to sound primo dorktastic but Battlestar Galactica rocks my face off ( as evidence by the fact that I watched 3 seasons, which is about 75 episodes, in 4 days) and now instead of Fuck, all I can think in my brain is Frack…if you watch it and you’re a geek too, you’ll know why that is.
I digress.

Back to the shelves- here they are now…and again, they’ll change but for now, they’re making me VERY happy. 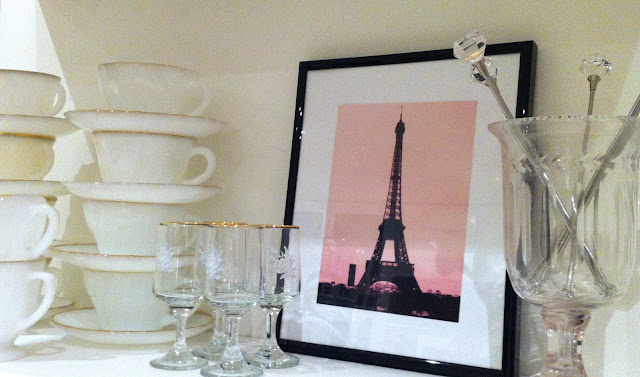 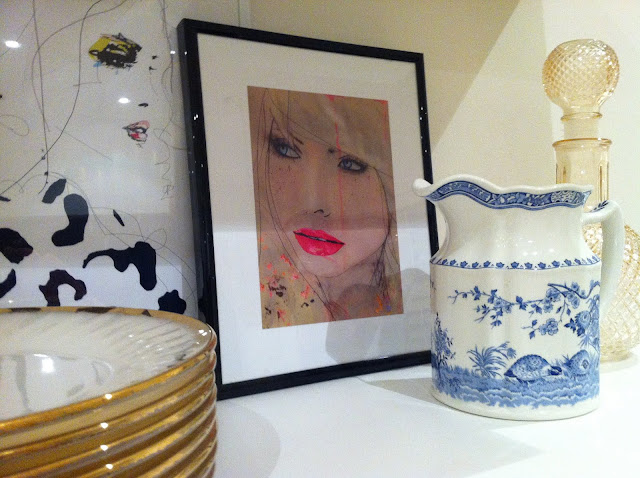 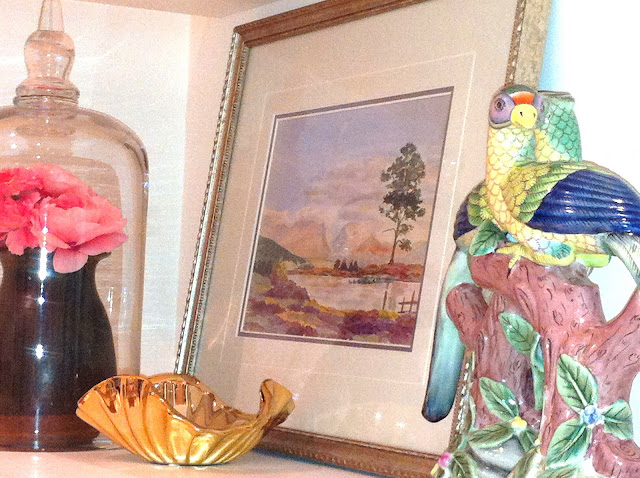 You’ll notice all of the Leigh Viner pretties…LOVE that I have a place do display the smaller prints in my ever growing collection of hers.
And I also wanted to point out the gold rimmed plates/cups & saucers…I just bought them from this
Etsy shop and hello deal…$25 for the whole set…things like that make me SO happy.

In other home news, I decided to give my living room chandy a little pick me up…I’ve always wanted to paint the sucker but have gone back and forth a zillion times on colour…so I asked Meredith because I’m smart like that and she said yellow so that’s what I did. 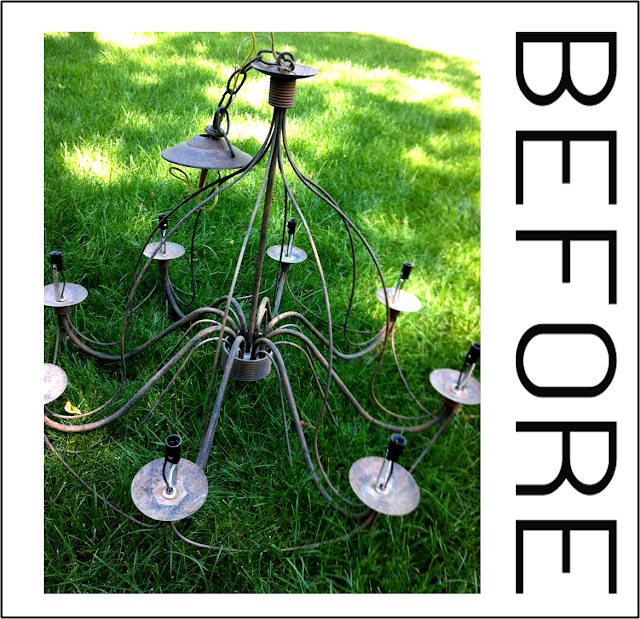 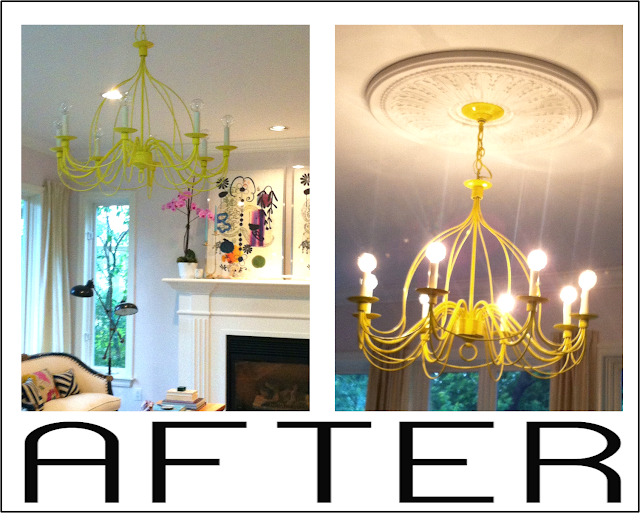 As part of the mini-makeover (which PS took at least 8 rounds of spray paint/two entire cans) I also added the ceiling medallion and switched out the bulbs for round ones…sorry for the grainy shots- I took them on my phone this morning and am just too lazy/impatient to wait for a brighter backdrop to take them again…the good news in that is that I think the skies might remain dark all day- halla freaking lula…it’s raining for the first time in a month here today.

And finally, I want to link over to a guest post I did for the very fabulous Kerry, of First Time Fancy.
For those of you who may not know the amazingly precious news, Kerry just had a little baby- an adorable girl named Halle.
She asked a few bloggers to put some posts together for here while she was at home with bambino so I obliged of course and drew up three design boards- one for each stage of her sweet girl’s life…nursery/little girl/teenager.

Here’s the baby’s room I came up with… 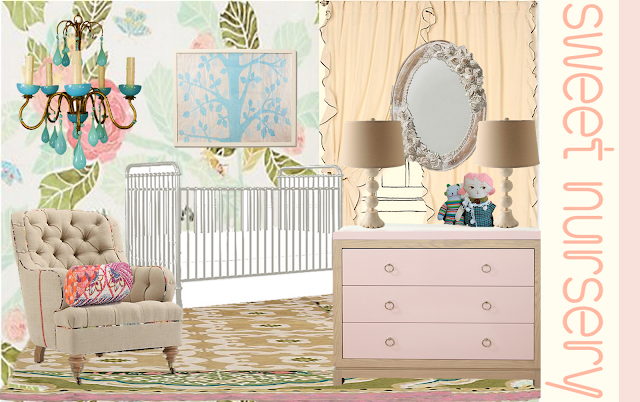 you can clickski HERE to see the other ones…my favourite is actually the little girls’ room…it’s being stored in the inspiration bank for Tulip’s big girl room…and PS on that one, I have too much stored in that file already.

Make sure you stick around and browse through First Time Fancy- lots of fabulous to look at!!!

And with that, I’ll see you back here tomorrow my lovelies…I’m hoping to get around and visit today- I’ve so been missing my morning reads!!