Posted at 08:24h in Life by Christine Dovey 0 Comments
Share
Happy Monday…I trust  you all had an enjoyable Father’s Day weekend.
Mine was swell…hubster and I had our first datenight since Jasper was born and it was nifty…I drank two glasses of wine…so civilized.
Also, little munchkin turned 3 months… 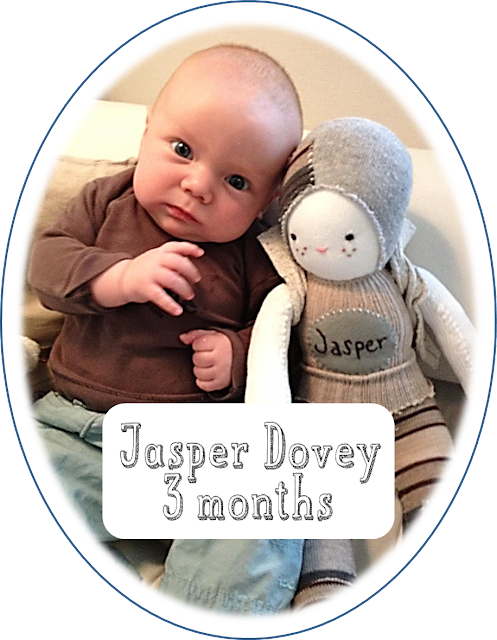 …which I totally can’t believe.
TIME GOES TOO QUICKLY
And aside from that, I totally fixated on all things #dreamhouse… 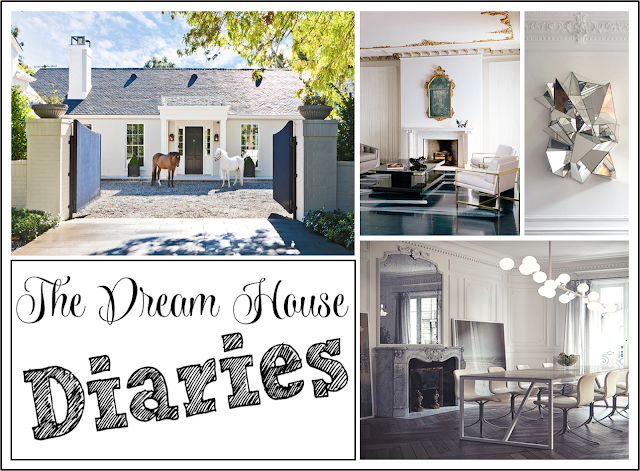 …mostly because….
WE BOUGHT THE LOT!
Yuppers…this little beaut of a property now belongs to us…

…which means the dream house is going to happen.
Holy Dinah.
Now as for the plan itself, we’re actually not selling our existing house…instead, we’re going to rent it out with the idea that we’ll sell it down the road after some more good old fashioned appreciation has happened.
As for the new property, we’re going to throw some paint on the hold house, clean her up a bit and hopefully rent it out while the planning/designing/permit getting phase of #projectdreamhouse takes place…if all goes according to plan, we’ll rent the old house on the new property out for 8-12 months, and start building in early summer 2014…we’ll stay in our exisiting house while construction takes place and then move on over to the new place, and hopefully rent our house.
There’s definitely a lot of moving parts in this plan and I won’t lie, I’m slightly terrified by the mere thought of it.
There be a lot of money on the table here and well, we don’t want to loose the farm as it were.
Thankfully, our ‘worst comes to worse’ back up plans means that if all falls apart, we’ll just hock one of the houses/lots and be back to where we are now.
Hoping that we don’t have to resort to that of course.
Anyhoo…we’re VERY excited and I’m obviously unable to think about anything but designing the living shit out of this new abode.
So, on that train, I’ve put together some moody moodboards.
But before we get to that, let’s chat about appliances…
The fam and I went and had a look at some on Saturday, just for shits and giggles.
I’m leaning towards either one of these… 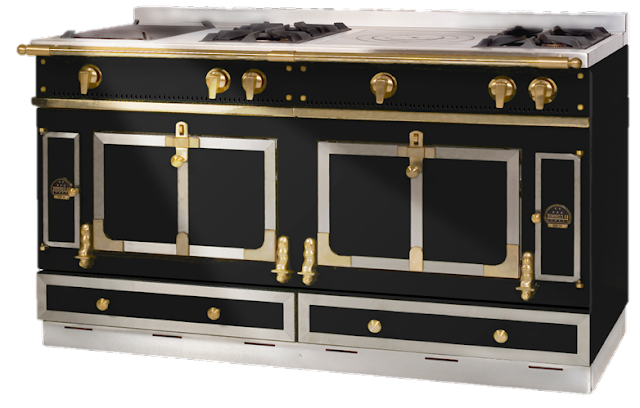 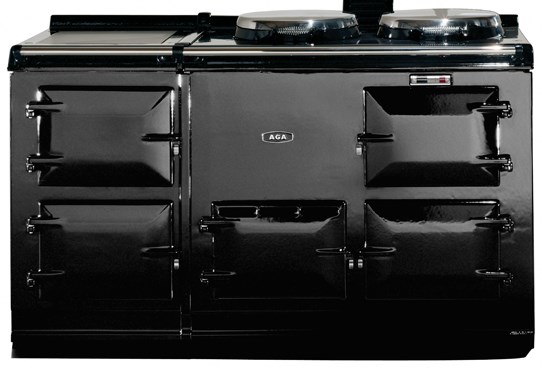 …obviously totally different but I adore them both.
Either way, stove/oven/cooker/whateveryouwanttocallit will be black.
The kitchen in this place will be the biggest brain drain for sure…I’ve got tons of ideas but I have to sort out how to mush them all together…more on that later.
For now, I’ve managed to firm up plans for both the living room and Malcolm’s room…hence, the moodboards.
I don’t plan on buying much in the way of new furniture for this place…we just won’t have the budget after actually building it…but…I do have hopes of adding a few new key pieces.
So far, this means a coffee table, sofa and some accessories for the living room and a new bed, chair and rug for Mac’s room.
As much as I adore little dude’s antique bed, he just really doesn’t…and since his current room was largely put together with hand me down house stuff, I would like to get him a few new things…and just to note, Scarlett and Jasper will NOT be getting room re-dos…the dream home will have full scale replicas of their existing spaces…though S will probably get a different wallpaper selection just to mix it up a bit.
Anyhoo…I played around with my new fancier version of Powerpoint on the weekend and mapped out plans for the formal living room an Malcolm’s room.
Here’s my plan for the fancy room of the house…. 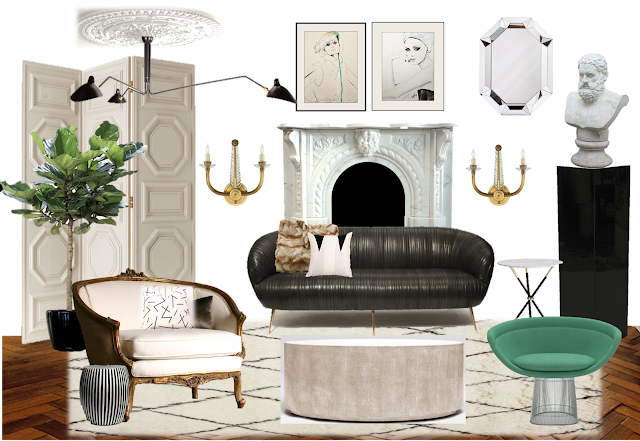 …note the new black leather sofa divinity, which I’ve been obsessed with for like ever…it MUST happen for me to be happy with life.
The settee is the one I have in our existing living room (just didn’t have a picture of it so subbed in another guy), the rug is our new guy that’s in the basement right now, and the Platner chair is also mine (thinking I’ll recover her in a lush emerald velvet)…oh and I also already have the Oly bust…so most of the goodness is
In my mind, this room will be to the right of a center hall with double french doors leading in…the walls will be completely moulded/paneled and some amazing medallion will house the Mouille knock off ceiling fixture I’ve also loved long time.
The room won’t be big but she’ll be good.
Moving on.
Here’s Malcolm’s ‘space cowboy’ room… 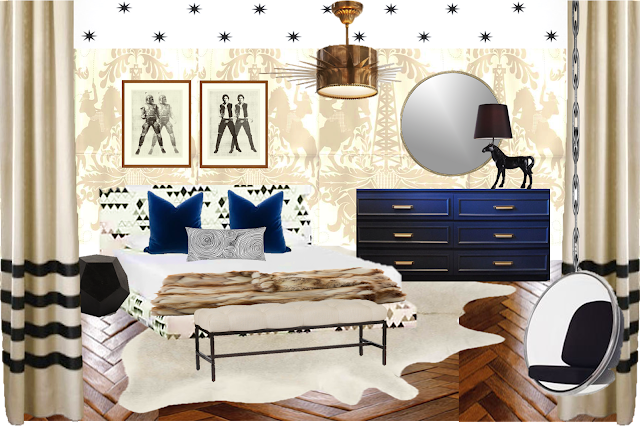 I just finished of a similar themed room for #projectwholehouse ‘s son and fell in love with the concept.
My Mac dude is obsessed with Star Wars and has repeatedly asked me to change his name to Luke Skywalker…when I found those art prints for my client’s kid, I pretty much knew they also had to end up in my Malcolm’s room as well.
The dresser is already his, as is the throw….but aside from that, this is newbie stuff.
The hanging ball chair will definitely have to happen since Mac would swing himself to death if we let him…and the upholstered bed in that fun graphic print is my new CB2 favourite.  I’ve had the Paul Loebach wallpaper picked out for him for years….love how the tone on tone cowboy print looks…and speaking of wallpaper, husband is pretty relieved that those black stars are just decals and not the $$$$ Coronota Star paper that I originally showed him…happy, happy.
So….for now, I’ve got two rooms squared away.
And the fun has really just begun.
Je Suis Excited.
xo